See Deux is TWO in French and Canada has two primary languages . . . English and French . . . haha? Whatever. Anyway, Teri and I headed up Saturday night after I got done at site. Apparently we hit Canada on another busy weekend. I never knew Canada was so dang popular!? But apparelty it’s a long weekend in Canada this weekend for BC day or something on Monday. So trying to find a hotel on Saturday night was again a pain in the a$$. But we eventually found one last non-smoking room at the Travelodge in Langley Township. We finally left Puyallup around 6:30 – 6:45 and checked into the hotel about 20 minutes after 10. Teri is not a big fan of riding in the car for much more than two hours, so I brought the laptop along and popped in a movie for her. (Side note: We connected the laptop to the TL’s audio system . . . I think I may start watching all my movies in the car! The sound was AMAZING! Even though it was just connected through a stereo headphone jack, it sounded like it was in surround. And the sub in the TL kicks a$$!) Once we were just north of 405, Teri started the movie . . . Shooter with Mark Wahlberg . . . and seemed to really enjoy the ride.

We checked into the Travelodge and headed to our room. It happened to be right above the office, so I assumed it would be loud. Not so much. As soon as we kicked on the air conditioner, the room was fine. Teri finished watching her movie and we finally hit the hay around 11PM. That was a LONG day! After getting up at 5:45 to go on a ride with team ISBG, then working at Thornbury for 7 hours and another 4 hour drive, I was WIPED! I slept OK, but not fantastic.

We woke up Sunday morning mostly refreshed. We headed off to breakfast at our favorite little Canadian breakfast chain, the White Spot. After breakfast, we decided to drive around rather than take the ferry that we used to come home last week. We ended up at the Ikea in Port Coquitlam. We love walking through Ikea for some reason . . . We grabbed a cinnamon bun and a bottle of water at the Ikea Bistro.

(Side topic: So over the past two weekends I’ve really been paying attention in Canada. One of the things I really noticed today is that there are not a lot of fat Canadians. I mean you just don’t see a lot of fat people walking around. Every day in the states I’ll see at least one, and often many, person that is larger than me. Now by medical standards, I am obese. But in Canada, over two weekends, I have not seen one person larger than myself. NOT ONE. So upon further investigation, I started looking at the ingredients of a couple of things. A couple of my favorite things. Ketchup and Coke. In the states, one of the main ingredients in both of these products is High Fructose Corn Syrup. In Canada, they list “Liquid Sugar” in the ingredients. I’ll have to find out if that is a different name for HFCS, but I doubt it. The products taste different. You may remember from a previous rant on here that I wanted to eliminate HFCS from my diet. I honestly believe that this could be a MAJOR reason why Canadians are not as fat as Americans. More research into the Canadian Versus American diet has to be done, but I think I’m on to something.)

OK, after Ikea, we headed off to Maple Ridge to see the puppies again. We arrived at Shelley’s house around 12:45, 15 minutes early. As it was pretty warm out today, Shelley had the puppies in their play pen on the concrete in the shade. Over breakfast I asked Teri “Do you think they will have grown much since last week?” She shook her head “No”. Well we were in for a surprise! It looks like these puppies ATE the other puppies! They were NOTICEABLY larger than last week! And a LOT more playful! They were running around and pulling on each other’s tails and ears. They were very much rambunctious puppies!

Shelley took us out back to show us a couple of her other dogs as well as a couple that she was boarding for some other owners. First off, we should mention that she has about an acre of land. And it backs up to a Provincial forest. It’s a beautiful piece of property! Her “pen” that she has for the dogs is no ordinary pen. I’d say it’s about 20′ X 30′ and all gravel lined. BUT it opens on the back to another fenced off piece of property she has. That area, I have no idea how big it is, but it’s AWESOME! It’s partially forested and it has a doggie race track around it. We watched a couple of the dogs playing and chasing after each other. She has a BEAUTIFUL yellow lab named Dixie! Also, one of Scarlett’s other puppies was there . . . although she’s now a full grown yellow lab. Jade. Beautiful dogs. I cannot remember the names of the two black labs in the pen (Fergie was one I think), but they were equally pretty! We feel really good about Shelley and Tristar Labradors. They have an awesome program and you can REALLY tell that Shelley loves what she does and loves the Labrador breed.

We went back to playing with the puppies and I commenced the photo taking. I’m afraid that the pictures this week did not turn out as well as last week. But I still got some good shots. I ended up filling a 2Gb memory card by taking about 217 photos. (YIKES! And I thought taking 74 last week was a lot!) I should note too that Shelley was so impressed with the photos last week that she wanted to have me take “posed” photos of each of the puppies. Both side shots and face shots. So I shot well over 100 photos there. So I won’t take full credit for all the photo shootin’. 🙂 I’m now considered Tristar’s official photographer. HA! I told Shelley that should move us up on the list a spot . . . she’s too honest for that. Dang it.

Last week, we had our eye on two puppies. The one known as “Wee Tiny” or the runt of the litter. She’s quite the cute little girl. And we had our eye on “The talker”. She was the one that would bark and wake up her brothers and sisters when she was ready to play. This week, “Wee tiny” was pretty mellow, but “The Talker” was as rambunctious as ever! There was even a point where Teri was on the ground growling and barking at her and she was barking and growling right back! It was about the damned cutest thing I’d ever seen! Unfortunately the battery on my camera was dead, so I didn’t get any photos of it. I should have grabbed the video camera out of the car . . . oh well . . . c’est la vie (another French phrase that means “That’s Life!”). When you look at the pictures, “The Talker” is the one playing tug of war with Teri and a dog collar. We brought up a dog collar to make sure it was the right size for when we take her home. It was. We also brought one of our cat carriers to make sure it would be large enough to bring her home in. It’ll work. Besides, puppy only has to be in it for 3 or 4 hours of her life, so she’ll be fine. We also left a blanket there that Shelley will put in the pen with momma and all her siblings so when we bring her home, she’ll have something with their scent on it. We want to make the transition as easy as possible on our little one. 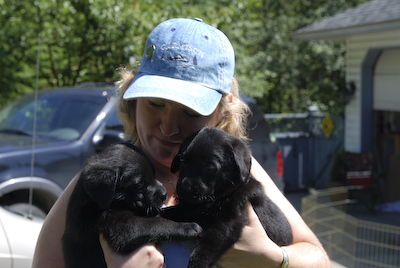 So it looks like Teri has her heart set on “The Talker”. Shelley did say she’d try to steer the two couples in front of us away from her, but I’m trying to keep Teri from getting her heart set on one puppy. It’ll break her heart if the one she wants is not available when we go to pick her up. We’ll see. I really want her to get the one she wants, so we’ll see what we have to do to make it happen. After 2 and a half hours, we headed back. We promised ourselves that we would not stay that long, but time flies when you’re playing with puppies!

The drive home was fairly uneventful. We had to wait in line to cross the border for about 45 minutes, but after that it was pretty much clear sailing. We got back around 8:30. LONG weekend! Gonna do it next weekend too! But first, I’m reserving a room RIGHT NOW!