So a couple months ago I listed my motorcycle, a 2002 Kawasaki ZZR-1200, in Cycle Trader. I haven’t really ridden it much in well about 4 years . . . so it was taking up space in my garage and I felt guilty for not having ridden it. So I listed it for sale. Originally I listed it at $6,995 and got a few calls, but no one ever came to look at it. About a month ago, I dropped the price to $5,995 and again, couple calls, no lookies . . . I got a call on Wednesday from a guy that wanted to see it and we arranged to meet yesterday at around 4PM.

I went to work yesterday morning for a few hours and then came home and gave the bike a good wash . . . pumped up the tires and rode it around the block a couple times to make sure everything was in working order . . . About 4:00 this guy calls and is lost. Typical for our neighborhood. We’ve had to give directions and guide people back on more than one occasion. So anyway after arriving at my house, we commence to talking about the bike. He seems interested enough and compliments me on how well I’ve taken care of the bike. We start it up, put it on the center stand and he continues to check the mechanicals of the bike. He asks me about the freeplay in the chain and I have to sheepishly admit that I’m not mechanically inclined at all . . . I simply start it up, warm it up and tear it up.

Teri came into the garage and I say “Well hon, it looks like we no longer own a motorcycle” she said “Ooooh. Bummer!” I think she honestly enjoyed riding on it as much as I did.

I’ll miss the bike. I’ll miss knowing it’s not there when I do get the wild hair to go for a jaunt through the twisties . . . We had some good times the Zed and I. Most notably the four days Brandon and I spent bombing through the Canadian backroads carving a line through the twisties and seeing if you could really get less wet in a thunderstorm by riding faster. 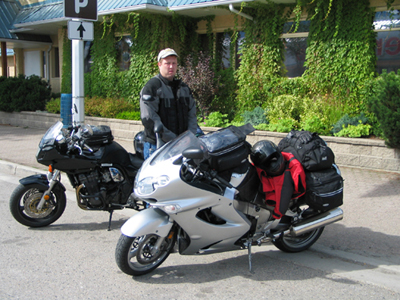 Brandon getting ready after lunch in Canada

Then there was the trip to Mount Saint Helens one day when the ZZR was still a rare site on the road, I had agreed to meet another Zed rider at the mountain. As we were standing there talking, what should appear? Another Zed! It was too cool! I dubbed it the first ever ZZR West coast Rally. 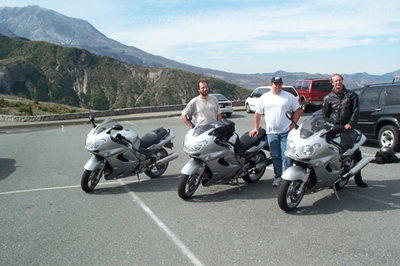 3 ZZR’s in a Row! Paul, John and John by their trusty steeds! 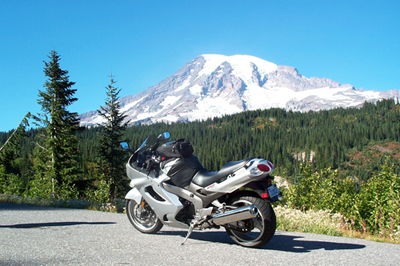 The Zed at Mt. Rainier