Here’s a letter I sent to my boyz today:

OK, since we all seem to be on this fitness kick . . . I want to throw a few items out there and see if they stick . . . i.e. who is interested and in what. These are some things I’d like to accomplish this year if at all possible. 2009 is a possibility for some of them too . . . but I don’t think most of them are out of reach by the end of summer if we keep up our routines. So here they are . . . not in any particular order:

I think it’s reasonable to knock off at least half of these this year. Keep in mind for the Mount Rainier climbs that Paradise, the starting location, is at about 5,400 feet. So don’t be too daunted by the elevation of Pebble and Camp Muir. The route to Pebble Creek will likely be snow bound until at least June . . . but with all the snow we’ve had this year, it could be July . . . from Pebble to Muir is ALWAYS in snow . . . so some extra equipment will be required if we’re to travel on snow. As long as enough people are there on the day we go, the path should be pretty well tamped down and we won’t need snow shoes . . . but up above Pebble it can get icy, so at the very least plastic boots, gaiters, and instep crampons would be a good idea.

Anyway . . . just thinking about being under 300 and what it’ll be like to be able to do some of these things again. I’m dying to get back to Camp Muir. The VIEW is incredible. 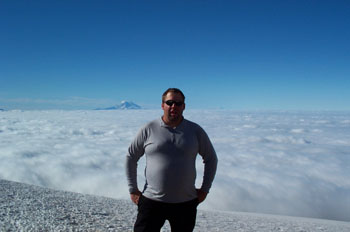