VHS Versus Beta for the new millenium . . .
341
post-template-default,single,single-post,postid-341,single-format-standard,theme-elision,elision-core-1.0.11,nested-list,woocommerce-no-js,ajax_fade,page_not_loaded,qode-theme-ver-4.5,wpb-js-composer js-comp-ver-6.6.0,vc_responsive

VHS Versus Beta for the new millenium . . .

If you remember the format wars of the 70’s ?? or was it 80’s?? You’ll remember the raging debate over VHS and Betamax as prevailing VCR standards. Beta was clearly the better format, but due to various issues, size, length of tapes, etc., VHS won out in the end.

Here in the first decade of the new millenium a similar debate has been raging although it’s not as hotly debated (IMHO) as I remember the VCR wars being. The new debate is over prevailing high definition (HD) DVD formats. In one corner you have HD-DVD and in the other, Sony’s Blu Ray. Both camps argue their format is better. On the HD-DVD side, supporters will argue marginally better picture quality, advanced features such as direct internet access and picture in picture. On the Blu Ray side, their supporters will argue larger capacity discs and support for advanced features coming with the 2.0 standard. Well apparently the fight is over.

In this article, it was announced yesterday that Toshiba, the largest manufacturer of HD-DVD drives is pulling it’s support for the format. With major studios like Warner also pulling out of the HD-DVD game, it looks like HD-DVD will be the betamax of the new millenium. I have an HD-DVD drive for my Xbox 360 and I’ve got to admit, watching American Gangster last night was a real treat. The picture was AWESOME and the advanced features over a standard def DVD are pretty cool too.

However, that being said, I’ve been wanting a Blu Ray player since I got my new TV and Receiver. It seems as though I may come into a Best Buy gift card in the near future that could provide me with a new Blu Ray player. So last night I started researching. I’m torn between buying a stand alone BD player or buying a Sony Playstation 3 which comes with a BD player built in. Both retail for about $399, but the PS3 has the advantage of also being a pretty awesome game machine. I’m still primarily an Xbox guy, but if a game came out that I really wanted and was only available on PS3, I’d have the option. 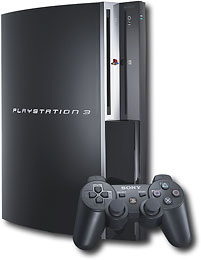 But, as the machine would primarily be used for it’s BD drive, I decided to do some research to find out if it was a good quality BD player, or simply an added feature of a gaming system thrown in to bolster sales. After doing the research, it looks like the BD player in the PS3 is actually Sony’s flagship BD player. OK, so it’s probably not as high quality as their ES line of players, however it does have some advanced features that even the ES players don’t. For example, with the PS3 already having an ethernet port, the PS3 BD player is already poised for the 2.0 spec for BD. Simply a firmwear upgrade for the PS3 and you’ve got the most advanced BD player on the market. No titles currently take advantage of the 2.0 spec, but expect them out later this year.

Many articles I read listed the PS3 to be amongst the best BD players they had tested. Some of the drawbacks they mentioned is lack of Analog 5.1 outputs, a non issue for me as my receiver takes HDMI inputs. They also mentioned that the PS3 will not internally decode some of the newer HD audio formats, again a non-issue because my new receiver will decode them all via HDMI. And the final drawback, which IS a bummer for me, is the lack of an IR port on the PS3 to allow control of the DVD player via a non-Sony, non-Bluetooth remote. Like my Philips Pronto. That would be a big bummer to have to add an additional remote to my current line up of . . . one remote. So fortunately over on AVS forums, I found a delightful work around for this solution that allows you to use standard Sony DVD IR commands to control the BD player.