Are You Uncomfortable?
344
post-template-default,single,single-post,postid-344,single-format-standard,theme-elision,elision-core-1.0.11,nested-list,woocommerce-no-js,ajax_fade,page_not_loaded,qode-theme-ver-4.5,wpb-js-composer js-comp-ver-6.6.0,vc_responsive 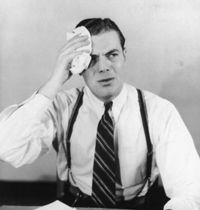 Have you ever had an “ah-ha” moment? Then later that day or week had another “ah-ha” moment? And then maybe just to make a point, sometime later, but still soon enough to remember the first two, you have a third, unmistakeable “ah-ha” moment? That’s the universe flicking you in the nose and saying “Hey! You! What do I have to do? Put this on a bus?”

As you can probably imagine by now, I’ve had three such “ah-ha” moments this week. Let me explain. On Monday I was attending the first day of the Brian Buffini Turning Point Retreat. During the morning’s discussion, Brian metioned something about getting uncomfortable. i.e. You can’t sit back and be comfortable, you’ve got to do things that make you uncomfortable to grow. OK, great.

Tuesday I was in a seminar on new home sales. The trainer, Jeff Shore, had a whole section on how top sales professionals do what’s uncomfortable for them to expand their business and grow. I’m seeing a PATTERN . . . .

Two nights ago, I wanted to have something to fall asleep to, so I scanned my vast library of Tony Robbins “Power Talk” series. I have to explain this. A couple years ago, I ordered a Tony Robbins series on CD from a late night infomercial. I’m embarassed to admit, I’m an infomercial guy. If it dices, slices and cleans your living room sofa, I’m SOOOO there! So along with this Tony Robbins series, they signed you up for a month of his “Power Talk” series. If you don’t like it after that month, you can cancel at any time you’ll only be billed for the ones you keep blah blah blah. So my kit came and I never opened the “Power Talk” CD I got . . . and I continued to receive (and not open, not once) “Power Talk” for the low low price of $29.95 per month for the next two years before I finally cancelled it. I literally have 24 – 30 “Power Talk” CD packs unopened in my office. So I grabbed two. One was about overcoming problems, which I listened to that night and the other was “Raising Your Standards”. I popped the latter into the CD player in the car for my trip to Olympia this morning. I could have literally chosen from 30 other CD’s, but why did I pick this one? It was somewhere in the middle, looked like EVERY other CD, but for some reason it stood out to me.

During this conversation with my close personal friend, Tony, he mentioned that we need to quit “shoulding” on ourselves. Say it, you’ll giggle just like I did. We need to turn our “Shoulds into Musts”. Instead of “I should go on a diet” change it to “I must go on a diet so that I can . . . ” fill in the blank there. Tony goes on to say that the only way to really grow is to get uncomfortable. Wait. Back that up. What did he say? Uncomfortable? I swore that’s what he said. Yep, that’s what he said. OK, universe. I get it. Seriously. Tony made the weight lifting analogy. You’re working on your biceps and doing curls. You want to do 10 reps of some weight. Which is the one you least want to do? Yep, number 10. Which is the one that’s going to give you the most growth? Nope, number 11. You’ve got to do the stuff you really don’t want to do or the things that make you uncomfortable to grow.

Tony goes on to further say that we’re doing just what we need to do to survive. We’re making just the amount of money we need. Not the amount we want or the amount we’ve set goals for, but just the amount we need. But if we just got uncomfortable for a bit and changed our thinking from “Shoulds” to “Musts” and stretched ourselves a bit, our growth would be exponential.

So my new mantra is “Are you uncomfortable?”