So this morning, I got up and headed to the gym . . . I’m still not completely over my Summer cold, but at 5:30, I was wide awake and figured I had nothing better to do. I hadn’t been on the treadmill in a few days so that’s what I did. I started out at 5.2 MPH and increased to 5.3 MPH at about 2 miles. I kept that pace until I hit the 3.1 mile mark at 35:49 (new record?). I cooled down a bit and then did 100 crunches. I was planning to lift this morning as well, but the weight room was packed, so I skipped it. Maybe I’ll try to get in there tonight. When I got home I weighed myself and was pleasantly surprised to find a reading of 301.0 on the scale. I think I’ve got a REALLY good shot at being UNDER 300 for the Tour De Pierce this Sunday! Now to just maintain my focus and keep up the workouts and eating healthier. I’ve only been to the drive thru once in the past 2.5 weeks and only had two sodas during that time. One was a coke at the same drive thru trip and the other was a sprite (caffiene free!) at the movies on Saturday night. I’ve learned too, that I can be satisfied with two slices of pizza and don’t have to eat half a large to feel full. Also, when Teri and I went to the Flying Tomato the other night, I was happy with half my entree. We did have a salad and bread before the entree arrived, but in previous visits, I still would have eaten the whole thing. It’s just so dang good! But it felt even better having leftovers. It’s all mental folks. Just gotta keep the motivation. 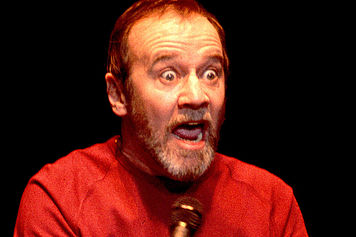 In sadder news, I heard this morning that one of the world’s funniest men has passeed away. George Carlin, dead this morning at 71. The bearded, pony tailed counter culture comedian was one of my all time favorites. Even to this day, I’ll be late to an appointment if Carlin is on XM comedy doing one of his famous routines. I was fortunate to have seen him twice in his career as he passed through Tacoma. I remember being introduced to George Carlin by Davie when we were around 15 or 16. Hearing those 7 famous words was like finding a pot of gold to a teenager. Maybe it wasn’t so good to be influenced by George at such an impressionable age, but I’d like to think he gave me the freedom to know that it’s OK, American even, to question authority. (Sorry Mom & Dad, I know High School was painful for you!) George, we’ll miss you and your unique brand of humor. And boy oh boy, if the little kids could hear what was REALLY on Thomas the Tank Engine’s mind . . . go in peace sir. I’ll be listening to you all day I’m sure on XM comedy.