I Am WE Are . . . Triathletes
400
post-template-default,single,single-post,postid-400,single-format-standard,theme-elision,elision-core-1.0.11,nested-list,woocommerce-no-js,ajax_fade,page_not_loaded,qode-theme-ver-4.5,wpb-js-composer js-comp-ver-6.6.0,vc_responsive

So back in April, I wrote a post titled “Am I a Triathlete?” after my boyz and I had finished our indoor Triathlon. The question was, because we did it indoors and on exercise bicycles, without real transitions, no open water, were we still considered triathletes? Well, the question has been answered with a resounding “YES! We are triathletes!”.

This weekend, Teri, Scott and I participated in Trifreak’s Big Ocean Shores Weekend sprint distance (1/4 mile swim, 12.4 mile bike and 3.1 mile run) triathlon. And you know what? We all had an absolute blast! I’ve got to say as life accomplishments go, this was right up there. All the training this year, all the anticipation, the goals, the encouraging one another, everything came together on July 12th, just after 7:30 AM. When we waded into Duck Lake to receive our instructions and then to hear the countdown FIVE, FOUR, THREE, TWO, ONE, GO! we were about to find out if we had what it took. 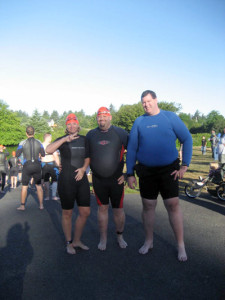 Teri, John and Scott Getting Ready

I’ll give you my notes on my first triathlon, so maybe it can help you through yours? First, lets start with the swim. Now, I grew up swimming in Duck Lake. But nothing can prepare you for your open water swim like swimming in open water. Teri, Scott and I all skipped this crucial step prior to this weekend. Our first open water swim was in Duck Lake for the actual tri. We survived, but I know we all wish we had been training in wetsuits and open water the whole time. First off, I hated swimming in a wetsuit. I hated the arms and the neck. I felt like I was really restricted in my stroke and felt like I was being choked all the time. But once I got around the buoy, I knew I was going to be OK. 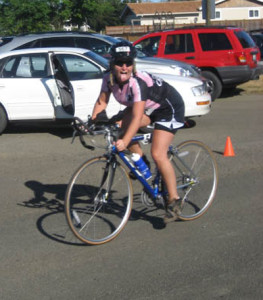 Teri heading out on the bike

Coming out of the water, I tried putting my sandals on, but they kept slipping off with the water, so I went barefoot over the briars into T1. Taking off the wetsuit turned out to be easier than I thought. I didn’t dry myself nearly enough, so putting my cycling jersey on was a chore. I could have easily shaved 30 seconds off here. I’m getting quick laces for my cycling and running shoes too. AND I found out later, you’re not supposed to have iPods either. OOPS! So I could have taken a few more seconds off by not screwing with that. I also learned my Forerunner 305 does not do well acquiring satellites while moving at 20 MPH on the bike. So next time, it will be on while I’m in the water. The extra 15 minutes of battery won’t kill me. 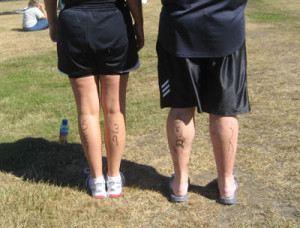 John & Teri Show Off Their Triathlon Badges of Honor

Once I was on the bike, the world settled down a bit. Having done multiple rides over 30 miles, the 12.4 was basically a sprint for me. I went out at about 22 – 23MPH and came back at about 18MPH. (I had guesstimated 20 out and 15 back) The wind was at our backs on the way out and in our face on the way back. I passed a few people on the ride and only got passed by one person. Teri and I waved to each other when we crossed on the bike and I shouted to Scott as we crossed. I counted the people coming back that were in front of me and including the one person that passed me, I was 17th off the bike. 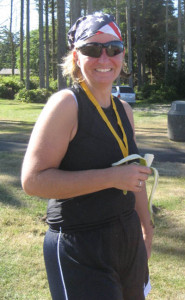 Teri at the finish

Coming into T2, I pulled off my cycling jersey and put on my dri fit shirt with my number on it. Off with the cycling shoes, gloves, helmet and on with a hat and running shoes. T2 was MUCH faster than T1.

Now running is not my forte, so I got passed . . . . a lot . . . on the run. At least a dozen times I think. I crossed the road to high five Teri when I saw her and again when I saw Scott. I kind of ran/walked the run. But I saved enough at the end for a sprint across the finish line!

I waited around for Teri and cheered her on her way into the finish. It was odd, Teri and I were both sobbing after we finished the race. For me, I think it was just an overwhelming feeling to know that YES! I CAN do a tri, AND enjoy it! And the culmination of completing a 20 year old goal. Teri said similar things, but I’ll let her explain what she was feeling in her blog. Then we grabbed some food and waited for Scott to finish. Scott’s youngest daughter, Jorja, went out to meet him and come into the finish with him. Very cool site to see! 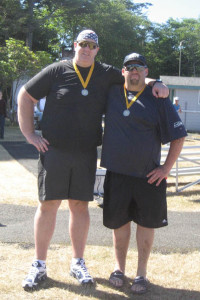 John and Scott at the Finish

Here are our official times from Athleteslounge.com:

OH and another bonus of doing Triathlon? I was down to 297 today (a new low!) AFTER eating lunch! SWEET! Now, time to get back into the gym and start prepping for the Dam2Dam in September!