3 Doors Down, Staind, and Hinder

Last night, Teri and I went with some friends, Lisa and Jay, to the 3 Doors Down, Staind and Hinder concert at the WaMu Theater at the Qwest Field Events Center. When I first realized where the WaMu theater was, I was skeptical that the sound quality could be all that good. The QFEC is after all, just a large open hall where they have RV and Boat shows. But the setup for the WaMu theater was really cool and you didn’t all all feel like you were in an exhibition hall. In fact, much to our delight and surprise, the sound quality was really pretty good.

I joked to Teri that we were getting old as we had made the decision to bring ear plugs to the concert. Turned out to be a good choice as most of the evening, we ended up standing right next to the stack of speakers on stage. The nice thing about being in General Admission and having an assertive wife is that you pretty much get front row seats. 🙂

Before the three headliners came out, there was an opening band, Sick Puppies from Australia. They only played about 4 songs, none of which I’d ever heard before. The crowd seemed to dig them, so it’ll be interesting to see if we hear more out of them in the future.

At just about 7PM, the lights dimmed and Hinder took the stage. Now fortunately I have XM Satellite radio and I’m pretty well versed in all three bands catalogs. When Teri originally mentioned going to 3 Doors Down, I was probably less than enthusiastic. Don’t get me wrong, I really like 3 Doors Down and have all but their latest album. When I looked at the show and saw that Staind and Hinder would also be performing, I said “Oh yeah, we gotta go to that!” 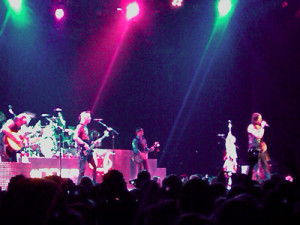 As the night wore on, the sets got progressively longer as you’d expect. With Hinder playing 6 or 7 songs, Staind playing maybe 9 or 10 and 3 Doors Down playing probably close to a dozen or more. All played songs from their latest albums and of course they played their hits. I was impressed with everyone. They all put on a good show. Staind came out a little flat, but by the end, they had found the energy of the crowd and used it. I think all three bands were genuinely grateful for their Seattle fans. Aaron Lewis, lead singer for Staind even payed tribute to one of their Seattle fans, Kaitlyn, by holding up a book and saying “Before the show, we met a girl named Kaitlyn who gave me this book. I just want to say Kaitlyn, you’re really sweet and this book is amazing. We really don’t deserve fans like you. So this next song is for you.” Or something approximating that. It was really nice and you could tell he was really touched by the gesture. 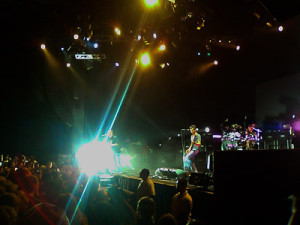 3 Doors Down front man, Brad Arnold, even jumped into the crowd a couple times to sing and greet the fans. He also seemed to be really happy with the Seattle crowd and waxed nostalgic about the couple months they spent in Seattle while recording their album, Away from the Sun. 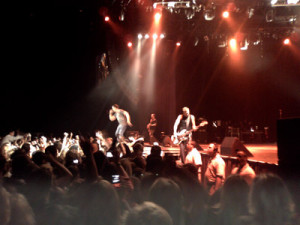 Overall, the four of us had a great time! All the way home we commented on what a great show it was. I’d definitely go back to see all three bands again, together or seperately. 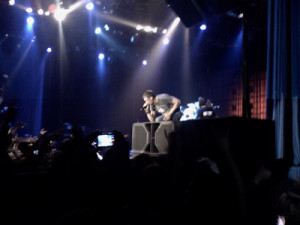 Brad Arnold Sings to the Crowd