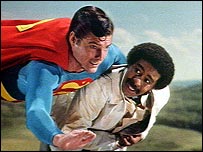 So does anyone remember Richard Pryor in Superman 3? Richard was a programmer who learned that his company rounded off dollar amounts and 1/2 cents here and there just got dropped. He wrote a program to put all those 1/2 cents into his own personal bank account. A few days later, he shows up to work in a Ferrari. Someone at Home Depot is driving a Ferrari. I’m convinced of it.

I have a client who is buying a house and is using her VA loan to do so. The VA is very persnickity on what has to be in the house for them to allow the loan to go through. This particular home had no stove and no vent hood. Both things that will be required for the VA to make a loan on the home. So my lender and I conspired to put a stove in the home. Problem was, the “Pigtail” (the part that plugs into the wall) was the wrong one for this particular home. So off to Home Depot I went and purchased what I “THOUGHT” was the correct pigtail. Nope, wrong one again. So back to Home Depot I go, I return the wrong pigtail. The price was $14.99 and with tax, the kind lady gave me back $16.30 in cash. I marched back to the appliance section and grabbed the correct pigtail and marched back up to the cash register. The new pigtail also retailed for $14.99. As I normally don’t carry cash, I figured I’d just pay with the money that was just returned to me.

Think of all the returns and exchanges that happen at Home Depot stores all across the nation on a daily basis. If everyone did what I did, there are millions of pennies being made every day. My theory is that when the amount comes up to say $16.3057 as a RETURN, they round down and give you back $16.30. But when the PURCHASE rings up as $16.057 they round up and collect the extra penny.