Apple, why hath I foresaken thee? 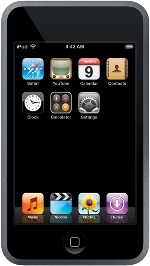 OK, Ever since the iPhone came out, I’ve wanted one. I won’t deny it. I’ve had phone envy. Unfortunately for me, my phone has to run my real estate applications AND it has to have an IR port, both of which the iPhone doesn’t do or have. So I’ve sat on the sidelines watching everyone with their fancy iPhones talk away, dealing with the version 1 issues and now the 3G issues. But then Apple did something. They released the iPhone without the Phone. No, they didn’t call it the i . . . they called it the iPod Touch. I wanted one desperately when the first version came out. But I waited. Now version two is out and it really is an iPhone without the Phone. So I lusted. For a few days anyway. Today I went to the Apple Store and picked up a 32Gb version of the new iPod Touch. I’m in love. There is no other way to describe what I feel about this device.

So let me tell you about the title of my post today. You see, I used to be a mac guy. I loathed anything with windows logo. If the letters PC came up even when they weren’t talking about computers, I would say “Macs rule!”. I had little rainbow apple stickers on everything. Then I got stuck on a helpline somewhere and you know what? No one called in with mac questions. They all called in with PC questions. So gradually the mac got pushed off my desk and I became an all PC guy. I got my MCSE and Bill Gates’ f-ups provided a very good income for me for a lot of years. But I’ve always looked at Apple longingly. Like the one that got away somehow.

When I bought my most recent laptop, I struggled for months over the decision to continue on with my PC habit, or maybe walk on the wild side and purchase a MacBook Pro. In the end, familiarity and comfort led me to purchase another Dell laptop. (I’m quite happy with it, but it’s not nearly as sexy as a MacBook Pro).

So today I went to the Apple Store at Southcenter mall. The store doesn’t officially open until 10AM according to the website and I arrived at the mall at 9:15. My plan was to just wander the mall for 45 minutes until they opened, grab the iPod and go. When I walked up to the Apple Store, the store was OPEN and there were about 15 people already inside. I walked up to one of the sales people, Katie, and asked “Are you having a special event or something?” Katie went on to explain that frequently they’ll open their doors at 7AM if they have customers that want to come in for training or other things. And if they’re not busy, they’re more than happy to sell things too.

Katie pulled out her little portable device that they use to ring you up and started to scan the iPod. As it was running really slowly, I asked “Is that thing running OSX?” she laughed and said “No actually, it runs Windows mobile” and showed me the windows logo on the back. (I’m sure Microsofties smile knowing that the POS devices in an Apple Store run Windows Mobile, they don’t run well, but they do run) I thought that was pretty funny. I pulled out my phone, also running Windows Mobile, and said “I feel your pain”.

So tell me people of the internet . . . why is it that Apple seems to do EVERYTHING right, but lacks significant market share? There’s not another store I know of (save maybe a mom & pop shop) where I could have shown up 45 minutes early, been invited in, treated with the utmost respect and kindness, and alllowed to purchase a product. Katie was AWESOME! Very friendly, kind and extremely helpful. The iPod Touch (along with my Shuffle and original Nano) runs flawlessly and works exactly as advertised. (Super Monkey Ball rocks!) Man, Apple . . . you’re likely to get my next laptop purchase. I miss my ol’ Mac IIci running OS 7 with 128Kb (yes, that’s right, 128Kb) of RAM. I can only imagine what a new MacBook Pro would do for me. Even if I did have to dual boot it into Windoze. [Sigh]