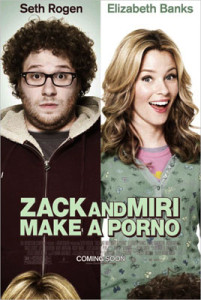 Now, I was listening to Opie and Anthony’s replay of this morning’s show on XM satellite radio and they had Kevin Smith on. Kevin was of course on to promote his new movie and he talked about the MPAA’s insanity over ratings of films. Originally Zach and Miri Make a Porno received an NC-17 rating. NC-17 is pretty much the death knell for a movie. It virtually assures that no one will see it. So if a director has a racy movie, they do whatever they can to get that NC-17 rating cut down to an R. Kevin Smith is no exception. But he has his limits. After cutting and cutting and cutting and still receiving the dreaded NC-17 rating, Kevin invoked the MPAA’s apeals process. And won. He’s now 3 for 3 in getting his movies re-rated from NC-17 to R. But while the MPAA would allow the movie to now be rated R after his successful appeal, they fired one last shot across the bow. This poster was not to be released in the United States.

Can you tell why? I couldn’t either until Kevin pointed it out on Opie and Anthony. Seriously what about this poster would prompt the MPAA to ban it in the US?

Give up? Notice the tufts of hair at the bottom of the poster? That’s it. The mere suggestion that Seth Rogen and Elizabeth Banks are doing something inappropriate. You can’t even tell if they’re facing forward or backwards. This is insanity. All I gotta say is that I can’t wait for the Director’s cut of the movie on DVD. Crazy.

For another rant on the MPAA and their ratings structure, see Jimmy’s blog.