Times, they are a changin’ . . . for the better
461
post-template-default,single,single-post,postid-461,single-format-standard,theme-elision,elision-core-1.0.11,nested-list,woocommerce-no-js,ajax_fade,page_not_loaded,qode-theme-ver-4.5,wpb-js-composer js-comp-ver-6.6.0,vc_responsive 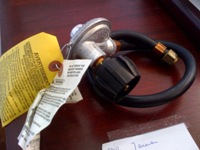 Interesting how a BBQ grill can be a reflection on the current state of your life. So last fall, I was at work and Teri had a girlfriend over and they were going to BBQ. They called me to say we were out of propane and I explained there was another tank next to the grill and to just swap it out. Well, in doing so, they cross-threaded the OPD coupling on the regulator hose. (Hi, I’m Hank Hill, I sell propane and propane accessories). So for the winter and up until now, we’ve basically been grill-less. Not too much of an issue because we rarely (why, I don’t know?) grill in the winter.

Last week I ordered the part ($20.00 with shipping) from Coleman and it arrived at my office today all shiny and new. So by this evening, I’ll be up and running again with my grill.

How is this a reflection on my life you might ask? I’m glad you did, because I’m going to tell you.

Step back in time 3 – 4 years ago and had this happened then, I would have said what a pain it was to order the part from Coleman, would have given away my grill on Craigslist and used the whole ordeal as an excuse to buy a shiny new grill. But these are leaner times my friend. With the downturn in the economy and housing market, we’re all making different choices.

On the weekend, Teri and I would frequently go out to breakfast on Saturday AND Sunday. For some reason, breakfast is always $30.00 when we go out. And breakfast is about the CHEAPEST meal to make. So now, if we do go out, it’s only on one of the two days and not every weekend. This weekend in fact, I bought $28.00 worth of groceries and we had breakfast at home both Saturday and Sunday and we have enough left over for next weekend too.

I’ve previously blogged about my new energy saving bulbs around the house and I’m constantly looking for other bulbs to change out. Now that Teri is eating beef, we’ve gotten Costco packs of Rib Eyes that typically come with three or four 16 oz Rib Eyes. We bring them home, cut each in half and freeze them. So normally I could wolf down an entire pound of Rib Eye in a sitting, I’m eating half of that and we compliment it with veggies to take up the slack. What would be a $70.00 or more meal in a restaurant becomes a $15.00 meal at home.

Movie tickets have recently hit $10.00 here on the west coast and now to see a movie, with dinner beforehand is about an $80.00 affair for the two of us. Enter our Netflix membership. Sure, we’ll still go see the big blockbuster for a first run movie, but we’re both perfectly content to wait for most of them to arrive on Blu-Ray in the mail.

So yesterday while I was pressure washing the back patio, I hit the grill a couple times and it’s shiny and new again. Tonight, the gas will flow and we’ll be back in business. Just like homes will start selling again (Nearly all of my listings have signed around offers on them) and the stock market will rise. My mamma always said “Life is like a BBQ Grill with a functioning OPD valve and regulator”.

Small changes, tighter belts, all good changes for the better. When things return to “normal” I’m hoping we have the tenacity to keep these changes in place.