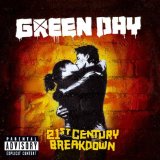 OK, so in reading the Fat Cyclist’s blog, I realized that Green Day has a new album out. “21st Century Breakdown”. I’m a Green Day casual fan . . . I say casual because I don’t have to have everything Green Day puts out, but if their album has one or two good songs on it, I’ll buy it.

So anyway, I opened up iTunes and looked, they have two versions . . . the Deluxe version and the normal version . . . $14.99 and $11.99 respectively. Since Amazon has opened up their MP3 store without DRM (Yes, I know iTunes has since stripped their DRM), I’ve started checking both places to compare prices (down economy and all). If the prices are the same, I’ll download from iTunes. But if Amazon has lower prices, I’ll download from them.

Amazon has this particular album for $4.99. Now even if I had to spend an additional $2.58 for the two bonus tracks on the deluxe version on iTunes, I’m still way ahead. I’m just not sure how this is even possible unless Amazon is losing money on the downloads to try to steal market share from iTunes. Anyone know? I’m happy to have the additional step of getting the songs onto my iPhone for a savings of $7!