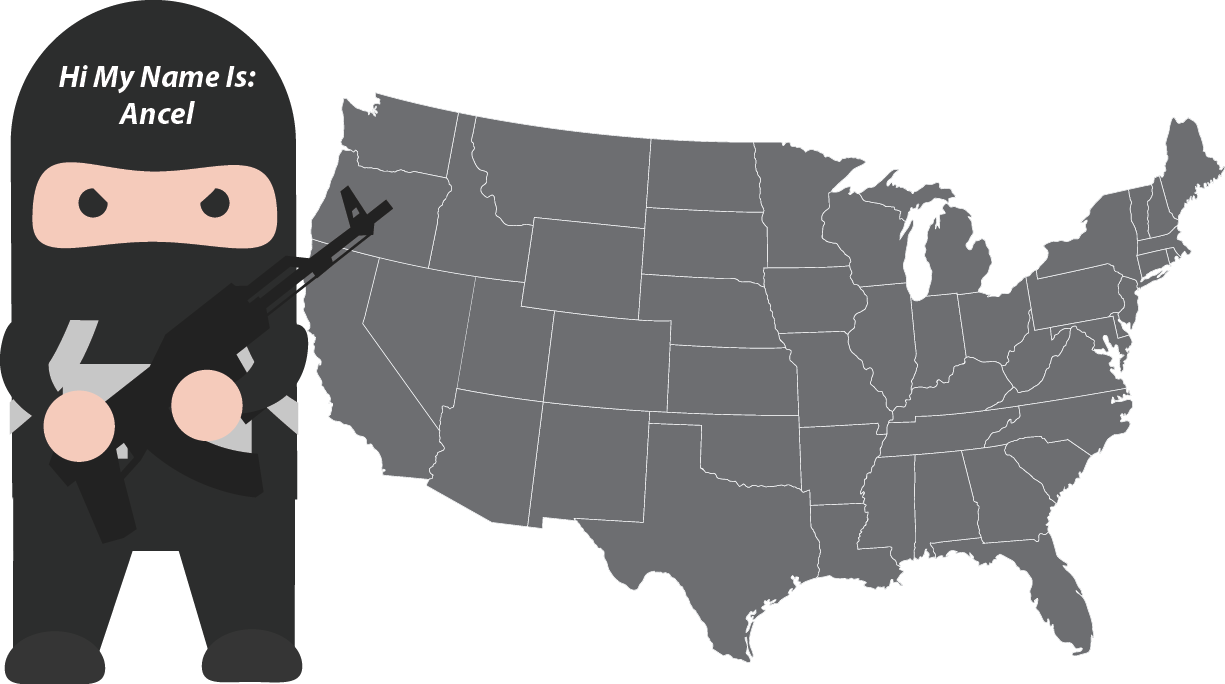 Ancel Keys Was a Terrorist…

OK those of you that are frequent readers of this blog, this is where you finally say “John has lost it”.  I don’t much subscribe to conspiracy theories.  But there’s one in the past four years that has been emerging in my mind, mostly through the reading I’ve done of nutritional texts, listening to nutritional podcasts and just overall keeping the thought of what it means to “eat healthy” or “eat clean” forefront in my mind.  Even if I wasn’t actually acting on it at the time, I was reading or thinking about it.  And watching the media to see what stories were coming out.  The conspiracy I’m talking about is the line of BS we’ve been fed as a culture about what constitutes a healthy diet.  At this point, I’m ready to label Dr. Ancel Keys as a terrorist.  That’s right I said it.  An entire nation’s dietary guidelines were altered on one man’s seriously flawed “scientific” study and it lead to an entire nation of overweight, diabetic citizens.  If you look at this definition of a Terrorist by our friends at Google, it says:

“a person who uses terrorism in the pursuit of political aims”

I can’t think of a more apt description than that.  Many of you may have never heard of Ancel Keys. His work came to light after president Dwight D. Eisenhower announced publicly that he had suffered a heart attack.  His doctor went on to tell the American public, that if they wanted to avoid a similar fate, they should stop eating fat and avoid dietary cholesterol.  The egg, a staple of the American breakfast became as vilified as as a defendant at the Nuremberg trials.  In 1980 the new dietary guidelines were established based upon Ancel Keys work in his Seven Countries Study.  Looking at a graph of Obesity Rates in the United States, there is a direct correlation to when these guidelines kicked in and when Obesity really became an epidemic. 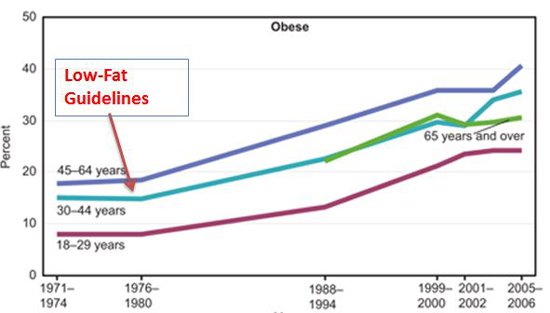 Notice the graph is 10 years old, so one could assume that if the trend continued, and look around, I don’t see a ton (pun intended) of skinny people wandering around out there, it’s even worse than it was in 2006.  Folks in my age group in 2006 there was a good chance, 41% or so, that we’d be considered obese.  Not to be outdone, the 30-44 year olds were quickly gaining and the 18-29 year olds were right behind.  Looks like they took awhile to care about the older folks and didn’t start tracking them until 1988 or so.  But think about it.  Those folks were born in the first great depression or shortly after.  There were hard times, they had a good run until 1980 to eat a healthy diet, then they got cranky when everyone took away their eggs and bacon.  So they lag behind my generation which was at the forefront of all this madness, so it makes sense to me that they would be behind me.

Anyway, back to Ancel Keys and terrorism.  Ancel Keys by all accounts was a bully.  Anytime someone challenged his Seven Countries Study, he would deride them and publicly shame them until they quieted down.  He continued to do that throughout his entire career until the only voice left standing was his.  The brief synopsis of the Seven Countries Study is this: Ancel set out to prove that there was a correlation between dietary fat and heart disease.  Anyone that has ever even remotely wanted to do a scientific study knows that this was already flawed.  You start any study trying to disprove a theory.  So for example, my theory is heart disease is caused by dietary fat.  I would study populations of people to determine how much fat is in their diet and what is the rate of heart disease.  Trying to disprove that fat was the cause.  I’d keep going until the only logical conclusion was that fat caused heart disease because the evidence was so overwhelming, I could not disprove the theory.  Then my peers would review my study.  Some (not many) would replicate it and try to get the same results.  After so long, after countless trials set out to prove that heart disease was not caused by dietary fat, it would become clear that heart disease was truly caused by dietary fat.  That’s not what happened.  Ancel Keys studied thousands of men in over a dozen countries (if memory serves) and threw out the ones that disproved his theory that dietary fat caused heart disease.  Most notably those from France and then West Germany.  Two countries who have a large dietary fat intake and some of the lowest incidence of heart disease in the world.  He published the study with the seven countries that backed his theory and the US government ran with it.

Every study that came out to disprove his findings was shut down, mostly by Ancel himself by bullying the authors of said study.  Only since his death in 2004 has science been coming to light, that ironically has been around for decades, that shows that he was wrong, or if he wasn’t wrong per se, his science was seriously flawed.  But now it’s almost too late.  Government policy has been set on what a healthy diet means for decades.  The American Heart Association still advocates a low fat, high carbohydrate diet and preaches Calories In, Calories Out.  The American Diabetes Association lists fruits, whole grains and nuts at the top of their “Quick Breakfast Ideas” chart.  I’m not going to go into if fruit, or grains, or nuts are good or bad for you, they have their place.  But the underlying carbohydrates are what are going to cause more damage to a diabetic person, or tip a pre-diabetic person into full on diabetes, while the elimination of carbohydrates has been shown in a number of studies to have reduced the effects of or even cured diabetes all together.  My point is that the American Heart Association gets a ton of money from companies that want to put the “Heart Healthy” logo on their products.  They’ve spent decades telling us that low-fat, high carbohydrate foods are “Heart Healthy”.  If they were to suddenly change course and say that High Fat, Low Carb foods are “Heart Healthy”, they would lose tons of funding.  They’re between a rock and a heart place.  They are so far down a road it’s impossible to change their stance.  We look to organizations like this as the leading experts in their field, yet they continue to be swayed by high profile companies backing studies to prove their point.  For example, this study funded by Coca Cola that seems to state that drinking Diet Coke is better for you than drinking water.

Back to our friendly terrorist, Ancel.  I don’t honestly think he set out to cause a spike in diabetes or obesity in the United States.  I do believe that he set out to prove that dietary fat caused heart disease.  He thought he did that and in the face of overwhelming evidence, he defended his position literally to the death.  But 36+ years of policy, lobbying by food groups, and all sorts of other back door politics that have created the system we’re left with now equate in my mind to the largest public disservice ever perpetrated on the American people.  Greater than any terrorist attack on our country, this has cost 10’s of thousands of lives over the past 4-5 decades.  Research is coming out that sugar could be responsible for many forms of cancer, Alzheimers, Dementia, Diabetes, and all manner of other debilitating diseases.

So that all being said over my years of research and personal experimentation, I’ve decided that I’m going to try and live my life as close to the Low Carb, High Fat lifestyle as I can.  My goal at the moment is to have 10% of my daily intake be in the form of carbohydrates, 20% protein and 70% fat.  I’m totally NOT advocating for anyone else to do this, I’m just saying that for me, this works.  I eat less overall, I feel fuller longer, my blood work and blood pressure improve, and to top it all off I lose weight.  The research I’ve read, points me in this direction.  I’ve chosen to believe people like Nina Teicholtz, Jimmy Moore, Gary Taubes, and the countless other authors and researchers I’ve read that seem to actually make sense to me.  If low fat dieting, killing yourself with exercise and counting every last calorie works for you, then do that.  It doesn’t for me, so this is what I’m doing. By the way, down 12 pounds in 8 days as a result.  But I’ll say it again, Ancel Keys was a terrorist.  I hope someone figures it out in the government and makes some drastic, sweeping changes.  Sweden is on board, so the tide is turning.

If you want a good article to read that sums up this much better than I can, have a look at The Sugar Conspiracy from Ian Leslie at the Guardian in the UK.

Finally, here’s a small list of the books I’ve read on the topic over the past few years, with links to Amazon as well if you’d like to do your own research:

Good Calories, Bad Calories, Gary Taubes (Haven’t read, but most of my other books reference it enough that I feel like I have)

Why We Get Fat, Gary Taubes (Again, haven’t read, but the other books reference it)

Let’s end the conspiracy and get healthy together huh?  Know this, dietary fat, doesn’t make you fat.  Dietary cholesterol doesn’t increase blood serum cholesterol.  Eggs and butter are back baby!  Knowledge is power.