So this past weekend, Teri and I headed up to Canada. We had some goals to accomplish while we were there. First and foremost, Teri wanted to face her fear of heights by walking across the Capilano Suspension bridge. Next we wanted to meet the breeder of our puppy and above all, meet our puppy! So Friday after Teri got home from work, we headed out. If I learned anything this weekend, it was to NOT be in the left lane crossing the border in either direction! The middle lane is where it’s at. As you approach the border crossing, the middle lane splits into two or more lanes, so it moves twice or more as fast as the left lane.

When we got to the border, the agent asked us the standard questions, where are you going, how long are you staying, and why are you coming into Canada. For the last question I proudly exclaimed “Puppies!” He looked a bit baffled and finally managed a “Are you going to buy one?” and I said “Yes, we’re meeting the breeder and putting down a deposit.” Apparently that was good enough for passage into Canada and we were off!

After arriving in Vancouver, we searched and searched for a place to stay near Robson street with ZERO luck. The 6 or 7 B&B’s we called were booked as were the few hotels we called. So we headed north through Stanley Park and into North Vancouver. We ended up at a Best Western and happened to get the last non-smoking room of the evening. The bed was surprisingly comfortable and we both got a good night’s sleep.

The next morning we grabbed a quick breakfast at Denny’s and headed up to the Capilano Suspension Bridge. Now I have visited the bridge in the past, probably 15 or so years ago. It’s pretty cool. It’s suspended 200 and some feet above the Capilano river and it’s fun to walk across. Being a suspension bridge, it’s held aloft by two very thick steel cables and as you walk, the bridge twists quite a bit. (Somehow I failed to mention that to Teri on our way up) I was encouraging Teri the whole day saying “Don’t worry, it’s easy! Just like walking on a sidewalk!” OK, a wiggly sidewalk, but a sidewalk none the less.

I’m proud to say that Teri made it across without much issue. She just kept on marching, not letting anything get in her way . . . well I think this series of photographs will tell the tale. 🙂 I’m very proud of my wife for facing this fear. We’ve still got a bit of work to do, but I think she’s well on her way and I give her kudos for being a trooper. On the way back across, I managed to get her to stop in the middle for a photo or two, but just for a second. Nice work hon! 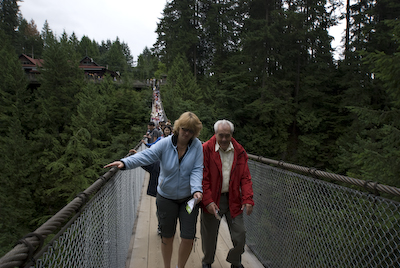 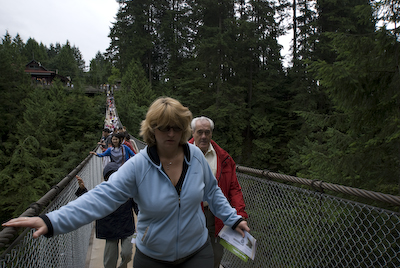 After Teri had a beer and calmed down a bit, we headed off for Maple Ridge to meet the puppies! The GPS in the car said 38 miles and over an hour to get there! Wow, I couldn’t believe that it would take that long, especially since the first portion of our trip was on Trans Canada Highway 1 . . . their equivalent of I-90. But it did . . . it took us just over an hour to get to Maple Ridge.

Pulling into the neighborhood where the puppies lived, there were some impressive homes on some good sized tracts of land (she had HUGE tracts of LAND! Sorry, bit of a Monty Python sidetrack there). Pulling up to the Tristar Labrador’s home, we could tell this was no puppy mill. Scarlett, the puppies mom came up the driveway to greet us with a bark. Once I got down on one knee and called Scarlett over, we were instant friends. She is a lab after all! Shelley, the breeder, had the puppies out in a play pen on the lawn and they had just eaten lunch. Another couple was there with their kids checking out the puppies too. They were just leaving. We introduced ourselves to Shelley and commenced with the puppy playin’! All in all, we were at Shelley’s home playing with puppies and asking questions for about TWO HOURS! How time flies when you’re playing with puppies! We gave her our deposit and headed out. If you click on the picture below, you’ll be transported to all the pictures of the puppies I took. Yeah, I went a bit photo happy, but who wouldn’t when confronted with NINE cute little puppies!? 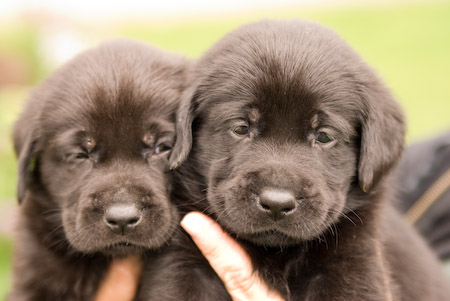 Now isn’t that about the cutest thing you’ve ever seen?

After playing with the puppies, we were hungry. A quick check of the Acura’s navigation system found the Black Sheep Pub & Grill in Maple Ridge. As it was about a mile off the main drag through town in a mostly residential area, I doubt we would have found it otherwise. I’m glad we did! It turned out to be a very cool sports bar. Something just like I’d like to own someday. Teri had a gardenburger and I had a real burger. Both were very tasty, and their Onion Rings were fantastic! Teri had a Guiness and I had a coke. We decided to head back that afternoon and not stay another evening in Canada. I could tell Teri was upset, but I couldn’t see spending another hundred bucks on a room when we had nothing to do. (By the way, has anyone noticed the exchange rate lately? A Canadian Dollar is worth about 93 cents USD! I guess gone are the days of 1 CAD to .65 USD so the trip ended up being a LOT more expensive than I had planned)

We plugged “Home” into the GPS and started our journey back. One portion of the trip had us going over water, so I assumed a bridge would be involved. Nope. Ferry time. So we got in line for the ferry, were told it would be about 40 minutes. We both grabbed a nap while we were waiting (the puppies must have worn us out) and sure enough, about 45 minutes later we were on the ferry and crossing over. Brandon and I ran into this on our motorcycle trip a few years ago. The Canadians are really into their ferries. Anytime you have a short crossing like this, they have a ferry. The ferries are free. I don’t know much about economics, but I can’t honestly see how a free ferry is cheaper than a bridge. You’ve got the ferry itself, the dock, the people running the whole operation, and all the maintenance involved with the whole thing. At SOME point, it’s got to make sense to build the bridge wouldn’t you think? Maybe not.

Anyway, about 3 hours later, we were back home. We’re heading up this weekend and next for some more puppy playin’. Then sometime between the 22nd and 25th of August, we’ll bring our new family member home . . . woo hoo!