Next to last trip to Canada!
233
post-template-default,single,single-post,postid-233,single-format-standard,theme-elision,elision-core-1.0.11,nested-list,woocommerce-no-js,ajax_fade,page_not_loaded,qode-theme-ver-4.5,wpb-js-composer js-comp-ver-6.6.0,vc_responsive

Next to last trip to Canada!

OK, so this weekend Teri and I headed up to Canada again. I’m pretty sure we’re on some terrorist watch list now. We’ve been up 3 weekends in a row. Don’t even stay 24 hours. And have gone across and come back via three separate border crossings now. So I fully expect on the 22nd when I bring our new puppy home, she and I will get the full pleasure of a body cavity search before we’re allowed to enter the United States.

Teri and I headed out on Saturday around 6:15. We made really good time and ended up at the Maple Ridge Travelodge at about 10:25. Sunday morning we got up and tried to get breakfast at a retaurant right across from our hotel, but it was PACKED, so we ended up at the White Spot again. Word of advice; AVOID THE MAPLE RIDGE WHITE SPOT AT ALL COSTS!!! We had what I would consider the WORST service possible. We waited nearly 20 minutes for a server. Then another 30 minutes for our food. Our server never ONCE checked back on us unless we were able to flag him down. My food was cold, there was some “foreign object” in my french toast. My refill on my drink arrived about 20 minutes after ordering when we were ready for the check. IT WAS HORRIBLE!! I vote it for WORST BREAKFAST EVER! I can’t believe Teri tipped . . . auuuuugghhh! (Still pi$$ed about breakfast!)

Anyway, we arrived at Shelley’s around 11:15 (15 minutes late, thank you White Spot!). The puppies were in their pen and Teri’s cousin Debbie had just finished scoring their personality tests. We went down to the full-size dog play pen and Debbie’s friend Michelle brought down her three labs, Sophie (4months, black), Lewis (chocolate) and Sam (2.5 years, black and father of our puppy) to let them play with Shelley’s dog Fergie. It was really cool to see them interact and play with each other.

Back up at the puppy pen, Shelley was “Stacking” the dogs. Basically standing each of them on a table to check out their various puppy parts to see how worthy they were of being a show dog. We went through each puppy and I shot 5 – 10 pictures of each. Shelley narrowed it down to three dogs and we did head to head comparisons of each. She finally chose “the one” and her alternate. This meant that the order of the “puppy draft” was set.

Wee Tiny was apparently the first chosen in the Puppy draft, followed by another female, then we got to choose. We chose what we have previously been referring to as “Red Head Female”. She is now known as “Taylor”. And is OUR puppy! I’ll head back up to Canada to pick her up on the 22nd of this month. Two days before my birthday! The picture below is of “Taylor” . . . we think her registered name is going to be “Tristar’s Hot Tamale”. Shelley is doing a “Hot” theme because it was so danged hot when they were whelped. If you click on cute little Taylor, you can go see all the photos of all the puppies . . . and see what I mean by “Stacking” them.

One thing that was really cool . . . Shelley was showing off Scarlett, Taylor’s momma. She had a rubber buoy that she would throw for Scarlett and Scarlett would wait until released to retrieve it (which she did with aplomb!) and bring it back. While Scarlett was retrieving, all the puppies were barking and whining to get at mommy. All except little Taylor. She was just sitting down watching the whole thing. Now we can’t be sure, but it just seemed like she was taking it all in and saying “OH, that’s what I get to do when I grow up!” When we would go over to the pen, Taylor would come right over and see us. When we’d call her, she’d come to us. It was almost like she picked us rather than the other way around. Pretty cool. Also, she did score the highest on the personality test. Which is good AND bad. It means she will tend to be a bit independent and Teri and I will REALLY need to be consistent on her training. But it als means that she’ll pick things up really quickly. So I’m really looking forward to life with Taylor around! 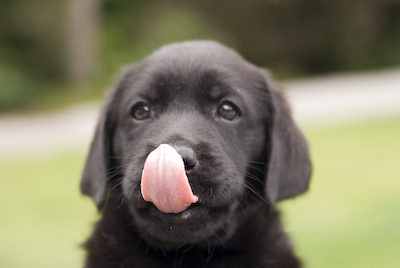 Taylor Posing for the Camera With Help From Teri
No Comments