I Shot a Deer!

That got your attention didn’t it? OK, with all the talk of guns on the blog lately, I can assure you, it’s not what you think . . . see? I shot it with my camera. This little doe was out in the grass outside our hotel in Ocean Shores last weekend just chowing down for a couple hours. This was shot from our window with a 300mm zoom lens . . . I had to crop it significantly just to make it even remotely interesting. But I DO love my 10Mp camera! 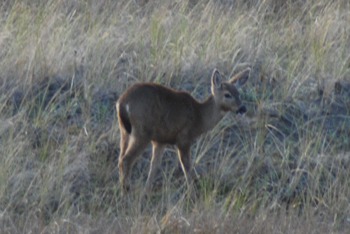 So last weekend Teri and I spent the weekend in Ocean Shores, my gift to her for our 1st wedding anniversary. It was nice. After a stressful Friday for Teri, by the time we reached Aberdeen, I think she had somewhat calmed down. We finally arrived around 9PM that evening and just missed dinner, so we had a snack at the bar there and listened to a not so good cover band.

Saturday was supposed to be crummy weather, but when we awoke, it was just overcast, so we decided to take the bikes for a spin. We set out to ride the Ocean Shores Triathlon route that we’ll be doing in July. It’s supposed to be 6.2 miles out and then 6.2 miles back, but to make it more interesting, we did an 11 mile loop. So for those of you that actually take the time to look at the Motionbased map below and use the map player, the long pause at 6.3 miles is the turn around and ride back. Going out, we had the wind at our backs and routinely my speedo read over 20MPH. After making the turn at the Silver King (Boy is that place a dump now days eh?) we were riding across the wind and our speed fell to about 15MPH . . . well, mine did . . . Teri fell a bit behind at that point, only because she has a comfort bike and I have a road bike . . I have clipless pedals, she does not. This is NOT to be taken as a measure of my riding ability versus hers. Just an FYI. 🙂 Then after turning North, the wind was really in our face and many times while waiting for Teri, my speed fell below 10MPH. But we still did it in about 54 minutes moving. I think in July I’m going to shoot for about 40 minutes out and back.

After the ride, I had us signed up for a couples massage for 30 minutes. I have to say, the massage was nice, but not nearly rough enough for either of us. To light on the pressure despite telling them to go harder . . . c’est la vie. After the massages, we sat in the steam room for 15 minutes or so. We showered and headed up the coast. We stopped at the Green Lantern for lunch. Then it was off to see Seabrook, Washington’s newest beach community. We weren’t overly impressed. When we got back to the hotel, we took a couple hour nap before heading to dinner. After dinner, I watched Teri gamble for awhile and then off to bed. We were on the road by 9AM Sunday and got home in time to do some yard work. A well deserved weekend rest for the both of us me thinks. I probably wouldn’t stay at the Quinault Resort and Casino again though. For the price, it just seemed to be lacking that extra sparkle to justify it. Dunno, something was off for me though.

Click on map to be transported to Motionbased for further analysis